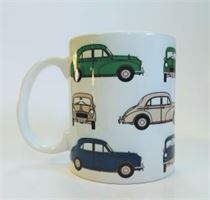 Designed by Alec Issigonis a young engineer at Morris Motors Ltd, the first version of the Morris Minor, the MM, rolled off the production line in 1948. The post war period saw many countries develop a small affordable vehicle and the Minor quickly became Britain’s favourite small car.

Despite the introduction of Austin’s Mini, the Morris Minor 1000, with it’s stalk indicators, remained popular until production ceased in 1972. Affectionately known as the ‘Moggie’ by collectors there are quite large numbers still to be seen around today.

It’s use by the police in the 1960s means that surviving examples are often ‘cast’ in many TV productions. ‘Heartbeat’ (ITV), set in the North York Moors region, often featured the blue and white police car. While in ‘Call the Midwife’ (BBC1) district nurse/midwife Phyliss Crane, played by Linda Bassett can be seen pulling up outside Nonnatus House in her light blue Morris Minor 1000.

This popularity as made it the subject of countless numbers of giftware and scale models. A recent find online is the Morris Minor mug by GalaxyXtra. A full wrap-around design featuring six faithfully produced examples in six colours, is the perfect way to show your appreciation of the wonderful ‘Moggie’ see here https://www.galaxyxtra.com/mugs/classic-cars/morris-minor-classic-car-mug.