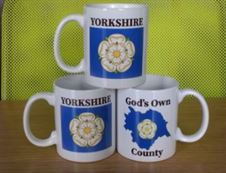 There’s only two kind of people, says the metal plaque in the visitor centre window, those that are born in Yorkshire, and them that wish they were! It’s all there in that one sentence, the pride and passion that only a true Yorkshire person can feel. I can’t imagine there is another county in the UK that has the same powerful sense of pride in the place of their birth.

Yorkshire even has its own flag. The first county flag to be recognised and officially registered by the Flag Institute in April 2008. It wasn’t an easy task as Tykes had for 50 years lived with the threat of being slapped with a £60 fine for flying the White Rose on a blue background.

Like many regions north of Watford Gap Yorkshire folk have had to endure mockery by areas of the country who thought themselves more refined. But all that is changing and the flat-capped Yorkie is becoming a faded image in the minds of many a ‘Off Cummden’. The 2014 Tour De France Grand Depart played a significant role in this.

The beauty of our county and its rich cultural heritage is attracting many new visitors, who saw the stunning images on their TV sets as Le Tour made its way through wolds and dales to stunning cliffs and beaches. In 2018 Yorkshire bucked the UK trend as the only region to see an increase in both visitors and revenue between January and June of that year.

Although surrounded by controversy, the work of bringing Yorkshire to a global audience by Sir Gary Verity and Welcome to Yorkshire has created a strong and positive brand image of God’s Own County.

Why not celebrate all that is Yorkshire with this wonderful God’s Own County mug. Only £6.94 (including FREE UK shipping) https://www.galaxyxtra.com/gods-own-county