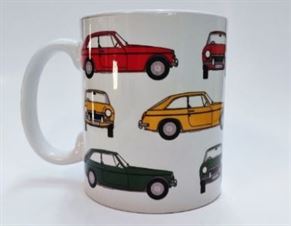 The MG logo as been seen around the streets of the UK again. I even saw three models on show at an outlet centre over last summer. However, the badge is where the familiarity British features end, as the MG Rover GRoup went into receivership in 2005 and it’s assets were snapped up by the Nanjing Automobile Group with the first of the Chinese MG’s rolling off the production line in 2007.

So the badge lives on, but not as we used to know it, but there are plenty of classic MG’s rocking up at car rallies around the country as the summer gets underway and the beautiful MGB will be a sure star of the show for me.

The classic British sports car we all know and love was conceived as a side venture by W.R. Morris who chose the initials from their Morris Garages name. Although it is synonymous with sports cars, MG also produced many saloons and coupes throughout the 1920s and into the 1950s and the two-seater sports cars been made at the companies Abingdon factory in Oxfordshire.

Through the 1980s the badge could be seen on various models such as the Metro, Maestro (with its ‘square’ steering wheel) and the larger Montego. For many of us the name MG will always be associated with the stylish and classic MGB. First produced in 1962, the marque was a success with sports car enthusiasts remaining in production until the Abingdon factory closed in 1980.

Have your own MGB on your 'to do list', nip along to GalaxyXtra where you will find a super classic car mug featuring a really well designed set of MGB images in their six original colours. View more information here: https://www.galaxyxtra.com/mg-mgb-gt-roadster-classic-car-mug.html