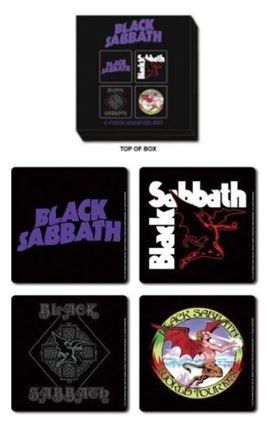 Having bought a cool set of Black Sabbath coasters to grace my coffee table it got me thinking about the band’s place in the Heavy Metal world. For those of us who are a bit long in the tooth, classics like Paranoid don’t seem that far away in our recollections of rock history.

So I did a bit of a refresher and was amazed to find the ’Brummie’ rockers first came together in 1968. Created by songwriter and guitarist Tony Lommi who was joined by Geezer Butler on bass, Bill Ward on drums and the man himself Ozzie Osbourne on vocals.

They went under a couple of names before settling on Black Sabbath in 1969, inspired by a Boris Karloff horror movie of the same name. Adopting a darker image with horror and occult inspired lyrics the band soon attracted interest, leading to the release of their first single ‘Evil Woman’ in 1970.

Timed for a Friday the thirteenth release the first self-titled album, Black Sabbath, was given a rough reception by music critics at the time, but Metal fans couldn’t get enough sending Black Sabbath up to number eight in the UK Albums Chart. This early success saw them rushed back into the studio to record their second album of 1970 ‘Paranoid’.

Quickly establishing themselves in the ranks of Heavy Metal, the band amassed a loyal following and by 1973, when they released their third album ‘Sabbath Bloody Sabbath’, they had the critics eating out of their hands. By now Ozzy had become the ’wild man of rock’ and excessive drug and alcohol binges were taking their toll on him and the band, leading to him been dismissed from Sabbath in 1979.

Black Sabbath continued with a number of changes to line-up into the 1990s. Only Tony Lommi was the constant and founding member throughout this period. In 1997 the original members, including Ozzy, reformed briefly to record the band’s last studio album ‘Reunion’.

In 2016, after selling over 70 million records throughout the world, MTVs ‘Greatest Metal Band’ of all time played their last ever gig in, where else, but their home city Birmingham on February 4, 2017. In 2019 the band achieved the Grammy Lifetime Achievement Award.

Amazing what buying a set of coasters can lead you to discover isn’t it? If you want to get your hands on a set just head over to https://www.galaxyxtra.com/catalog/product/view/id/915/s/black-sabbath-coaster-set-class-icons/