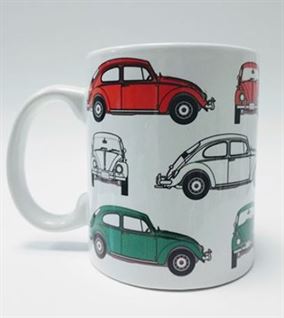 The Volkswagen Beetles popular appeal has made it one of the most iconic classic cars of all time, immortalised as Disney’s ‘Love Bug’ in Herbie Goes To Monte Carlo and Herbie Goes Bananas, but it’s origins are a far cry from Tinsel Town

In 1934 the Nazi government in Germany began developing a car that was affordable and reliable. Dr. Ferdinand Porsche was given the task of designing the Type 1 car. A new company was set up in May, 28, 1937 and changed to ‘Volkswagenwerk Gmbh’ (Peoples Car Works) the following year, with the main factory at Wolfsburg.

Before production could get underway on the ’Kafer’ (Beetle) war broke out and efforts were diverted to military production. A light general purpose car known as the ‘Kublewagen’ was developed. This was a basic flat panelled version of the Beetle with a retractable canvas top which was the Wehrmacht’s version of the jeep.

Has the Second World War came to an end, the British instructed Volkswagen to begin production of the Type 1 Beetle Saloon followed by the Type 2 Transporter. By 1946 10,000 Beetles had rolled of the production line. Ten years later a million of the amiable bugs were running around the world’s cities. The Beetle soon became the favourite mode of transport for beatniks and hippies as the 1960s progressed. In 1972 the record held by the Model T Ford was broken as the 15,007,034 Beetle left the factory.

By the time the last Classic VW Beetle was made in Germany over 16 million of the little ‘Kafers’ had been produced. But, on January 18, 1978 after 32 years of production, the very last German Beetle rolled off the production line in Emden. Production continued in Mexico until May 28, 2003 when the last of 21,529,464 came off the production line. This final Beetle, in Baby-Blue, is now in a museum in Wolfsburg, Volkswagen’s headquarters.

During the 1990s a new VW Beetle was produced. Originally as a auto-show concept, the new Beetle was soon in demand, especially in the USA. Sales have been in steady decline since 2015 and Volkswagen have decided to cease production at their Mexico plant in July 2019. The end of an era, but VW say they can’t rule out a new Beetle in the future.

Until they do, GalaxyXtra has produced this beautiful Classic Type 1 Beetle mug with six original colourways available. To see more click the following link: www.galaxyxtra.com/volkswagen-beetle-classic-car-mug.html