The Lure Of The Russian Doll

The Lure Of The Russian Doll 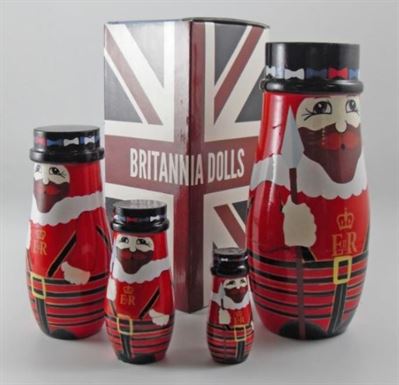 I’m not sure what it is about the nesting Russian doll that holds such a fascination, but the attraction of them is something that continues to compel from childhood into our adult lives.

First fashioned in China about 1000 they then spread across to Japan where they were used to create the Seven Lucky Gods or Shichi-Fukujin. The first doll would bear the image of Fukurojuro, the god of happiness, who would then open to reveal the six other Lucky Gods.

The wife of a wealthy Russian named Savva Mamontov saw one of the Japanese dolls who then described it to Segei Maliutin who was one of her husband’s circle of artist friends. Maliutin took the idea and blended it with traditional Russian folk art creating what was to become the symbol of Mother Russia.

Maliutin got a well known craftsman called Zveydochin to craft to dolls which he called “Matryoshka” meaning mother as the rounded shape of the first doll gave the impression of a mother and her children. Decorated wearing sarafijin, and apron and the babushka head scarf, traditional Russian folk cloths, the mother doll contained seven of her ‘children’. Six girls and a boy, the smallest being a baby in nappies.

Today “Matryoshka” dolls come in all shapes and sizes some cleverly painted to resemble world leaders and other famous people. Others can be found resembling traditional British symbols such as 'policemen' and 'beefeaters' examples of which I found on the website of GalaxyXtra which offer great value for money and make great gifts, see the product here https://www.galaxyxtra.com/regional/britannia.html