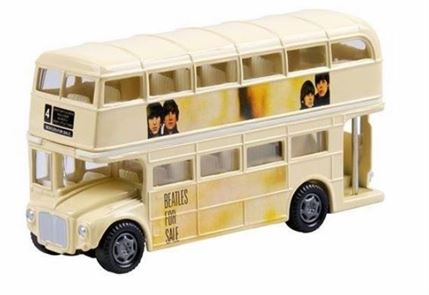 When it comes to super bands Liverpool’s Fab Four are right there at the top. Their legendary status in the Rock Hall of Fame is forever guaranteed for all time.

The Beatles are also the best selling band of all time and it’s reckoned they have sold a staggering 800 million records globally, and had more number one albums in the UK charts than any other British act.

Celebrate the Beatles legacy with this famous covers diecast vehicle featuring the Band's iconic ‘Beatles For Sale’ album sleeve artwork faithfully reproduced on a 1:64 scale London Routemaster bus. The album was the bands fourth studio album and spent eleven weeks at the top of the UK album charts. Eight Days a Week, the LP’s most well known track, becoming the band’s seventh number one single on its release in February 1965.

You can get hold of this wonderful model for only £14.99 simply by visiting this page What’s more, Shipping to anywhere in the UK is absolutely free!